Following last weekend’s chilly, but cheery experience of taking part in the Kindred and Friends Makers’ Fair I wanted to write something about the joy of joining this vibrant creative community and how it is already enriching my life to be around so many kindred spirits. I’ve learned over the years that community isn’t a seed that sows itself and survives on its own – it requires care and dedication, nurturing and participation to create an abundant garden. I’ve made several attempts at finding people to work alongside over the last few years with varying degrees of success. After only a month or so of working at Kindred I can already see so many things they are doing right.

Uncertainty and isolation are the two great banes of a freelance creative’s life. I found that out to my cost after working by myself at home for a couple of years when I first returned to London, after my adventures in the Netherlands, Spain and the Americas. That was nearly ten years ago now, and when I look back on those early years in this great city I see how lonely I felt day to day and how hard it was to feel part of something bigger than myself. One happy day I discovered the existence of an affordable hot desking space in Soho. This was a great gift that changed my life completely and was my first step towards finding a working community that suited me well.

Hot desking, however, was only a temporary solution for me. While meeting new people everyday was a thrill at first, after a few years I realised the constant socialising was reducing my productivity rate. For an introvert such as myself a plethora of introductory conversations each day was quite draining. What I really wanted, I realised, was a small space with about 8 or 9 people who I knew and who I would see most days. Et voila, I stepped into the unknown and gave birth to the Hive Mind Collective (now Hive21) in a small studio space in Westbourne Studios in Notting Hill.

This was my first experience of creating community with a specific intention and boy, was it a steep learning curve. I had so many expectations, some of which were fulfilled, some not. The experience of running a coworking space taught me so much about people – my inner control freak found it hard to deal with people saying one thing and doing another – finding equilibrium in the uncertain and unexpected was vital, otherwise I would continually be knocked off course. Nurturing community was challenging and rewarding in equal measure, and helped me learn to, essentially, just let go.

Leaving Hive21 in October this year seemed like a crazy thing to do. Who puts four years of effort into building a working community and then volunteers to leave? Well, I did. In some ways it still seems strange to me now that such an endeavour would have a shelf life, but with the unexpected dissolution of my business partnership earlier in the year I realised I needed a change of scene in more ways than one. I’m so grateful for the companionship of the brilliant, kind, talented people who populated Hive21 over the years. I know I’ve made friends for life and it’s the greatest compliment to me that, although I chose to leave, they all chose to stay and continue what I started.

Through great fortune, on leaving Hive21 and facing the unwelcome prospect of working in isolation back at home again, I found a new home at Kindred Studios. And so begins a new chapter of my creative life. Kindred Studios was founded by two dynamic and enterprising women Jaime Turner and Angelique Schmitt. Having run my own co-working space I know the time and energy it takes to grow a cohesive community. I am blown away by the dedication Jaime and Angelique have given to their creation and by proxy the dedication of everyone who works here to the community spirit. There was no greater demonstration of that than the Makers’s Fair in Portobello this past weekend.

Not only do Kindred artists care about being connected inside the studios, but they also care about being part of the local geographic community. After basing my own little rogue co-working space in a huge corporate building for the last four years, joining Kindred has highlighted how hard I was working against the machine in so many ways. Both with my work and with my workspace I was meeting a lot of resistance and often felt as though I was continually meeting a brick wall. On leaving, I made a wish that in the next phase of my life I wanted to experience more flow.

Amazingly, flow is exactly what I felt when I stepped into Kindred for the first time. The space Jaime offered me, almost immediately, has plenty of natural light and there are trees outside the window – what joy. Almost everyone I meet in the corridor says hello – how friendly. I was invited to be part of the Christmas Market within a few weeks of arriving – so inclusive.

The market was a new experience for me and it was tough, I’ll admit, but the very best part of it was the people. Getting to know my new studios mates, learning about their work, watching them collaborate on so many creative elements of the event. Little kindnesses proliferated throughout, looking after each other’s stalls, getting people hot drinks, distributing cardboard to insulate our feet against the cold concrete, the encouraging chats when we didn’t feel all that buoyant about how it was going, the helping clear up, the driving car loads of products between the studio and the market.

This past weekend, while I was frozen and shivering on the outside, I was deeply touched and warmed on the inside by the huge communal effort that went into creating this three day event. Jamie, Angelique and Miranda lead by example, working continuously with so much attention to detail, ensuring it all ran smoothly and inspiring everyone else to pitch in. I feel so grateful to have been welcomed into a makers community and to have stepped into a new workspace flow I haven’t experienced before.

Who knows how long this goodness will last. There are many factors which threaten to push artists, designers and crafts people out of central London. I watched a mass exodus of them exit Westbourne Studios as the prices were hiked higher and higher. I’m proud to be part of this bastion of creative, collaborative, resilient community. Bless Kindred Studios and all who sail in her. 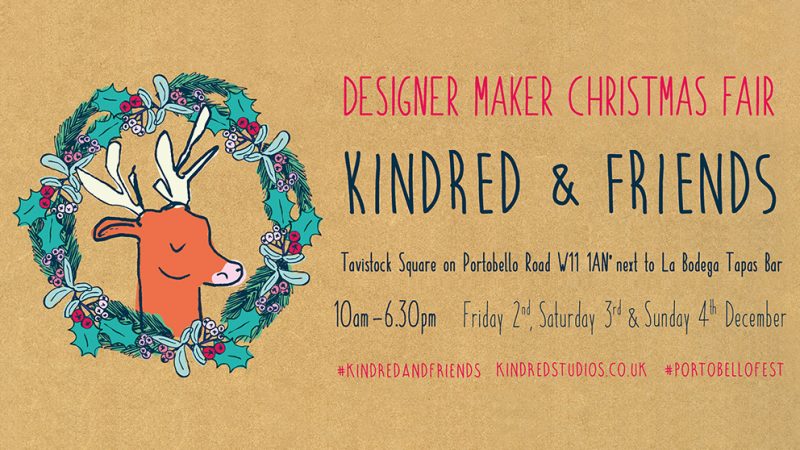 Having recently joined the wonderful Kindred Studios, I’m excited to say I’ll be taking part in their designer / maker Christmas Fair from Friday 2nd to Sunday 4th December. It’s going to be a riot of creativity. Please drop by to say hi. I’m selling limited edition giclée prints of my life drawings, as well as postcards of my work to raise money for the Maggie’s Centre in West London. They make for rather beautiful Christmas presents, even though I do say so myself! See you in Portobello.